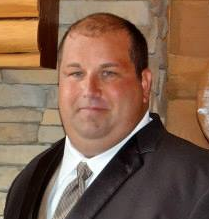 Bill decided in late 2013 to join the United Country Family. Bill is focused on putting together a state of the art auction and real estate company. With national and local advertising, United Country Burke Auction and Realty is bringing new life to Crawford, Jasper and Richland, Lawrence counties along with Central and Southern Illinois.

Bill grew up in Olney, Il., until he was in the 5th grade and at that time his mother took a job at Hershey Chocolate and moved the family to Oblong, Il. Basically growing up and taking county wide classes in high school, Bill built relationships all over Crawford County. Bill is a 2000 graduate of Oblong High School and a 2005 graduate of the Missouri Auction School. He has been employed in a variety of different jobs in his career. Bill has had 2 jobs since 2005, working days and working auctions in the evenings and weekends. In 2009 Bill went to work full-time for Bob Fiscus Auction and Appraisals. In 2012 Bill opened Furniture and More in Oblong, Il. In 2013 Bill also bought an office in Oblong and opened United Country Burke Auction and Realty. In July, of 2014 Bill sold Furniture and More to strictly focus on the Auction and Real Estate business.

Bill was recently married in 2014 to his wife Sarah. Bill has 2 daughters, Alysen and Aireka. They are involved in sports and many school activities. Bills hobbies include, attending auctions, hunting, fishing, being outdoors in general, side-by-side rides with the family and watching his daughters play softball.

You don't have any testimonials .

Each Office Independently Owned And Operated. The information provided herein is deemed accurate, but subject to errors, omissions, price changes, prior sale or withdrawal. United Real Estate does not guarantee or is anyway responsible for the accuracy or completeness of information, and provides said information without warranties of any kind. Please verify all facts with the affiliate.
Copyright© United Real Estate
Privacy Statement-Terms Of Use

If you are using a screen reader, or having trouble reading this website, please call our Customer Support for help at 800-999-1020 .

Leave a message for Bill